In this episode, Sean Corvelle sits down with the author of Runner’s High- How a Movement of Cannabis-Fueled Athletes is Changing the Science of Sports, Josiah Hesse. The investigative journalist began experimenting with running and taking cannabis edibles at the age of 29. Now, Josiah writes about politics, marijuana, and evangelical culture and theology, and is a regular contributor to The Guardian and Vice. Listen to his discussion about cannabinoids and their involvement with athletics, mental health, culture, stereotypes, and more.

Connect with Josiah on Social:

TM: Tell me about the feeling you have when you’re running after taking cannabis.

J: The euphoria, the experience itself is something that really fascinated me and I didn’t know so much of the evolutionary biology behind this. We all have a reward system that came about through evolution that encourages us to sleep, to eat, to have sex, to learn, and to exercise. Most people enjoy sleep, most people enjoy some type of foods, most people enjoy sex. But most modern Americans don’t get the pleasure from exercise. I think there’s a variety of reasons for that. A lot of them are psychological, but also the runner’s high itself, setting cannabis aside, is something that is a very specific window of running at 70% heart rate for 30 minutes. Most people are either going way too slow and not really reaching that heart rate or they’re just burning right past it because if you go too high of a heart rate, you’re just gonna get stressed out. But there’s a nice medium aerobics zone, that when you get into, we have this endogenous cannabinoid called anandamide which comes from the word for bliss in Sanskrit, but it’s in everyone. It’s in all mammals and it acts just like THC, just like cannabis on the brain. So the runner’s high that people talk about is very, very similar to the cannabis high. When you combine the two together, you get a supernova transcendent experience, or at least I do, and a lot of the people I talk to you for the book do.

There’s a feeling of weightlessness. It feels like I just lost 50 pounds and I can gazelle my way up that hill, without any troubles. That’s the sensation. Anti-inflammatories circulating throughout the body, so the pain in your joints decrease and that’s part of the national runner’s high as well. But also a kind of body high, a sort of goose bumpy sensation. For me, I’m always listening to music. I know a lot of runners don’t and it’s very controversial. But if I’m in the park, I’m not bugging anyone. There’s no bicyclist coming up behind me, like there is on the trail where I have to take my headphones off, but you get dialed into the song as well. I curate playlists, very specifically for different runs. So it’s a kind of mood that I’m in and also the meditative quality of repetition. You think about meditation, and a lot of it is breathing,  following your breath in and out, or counting 1, 2, 1, 2, or a mantra, or something that hypnotizes you into another realm of consciousness. I think you get that with running after a certain point, whether you have cannabis or not, or music or not, or whatever, the repetition. It’s not like basketball, where you have all these explosive movements, or any kind of competitive sport. There are variations, if you’re on a trail, you are sometimes running faster than others, but for the most part, it’s just 1, 2, 1, 2, 1, 2. And you get lost in that with, in my experience, a little dose of THC in the right zone. 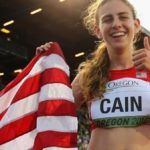